I believe that it’s every father’s dream that his son follows in their footsteps. Well, my son, Paul, didn’t exactly follow mine, but we still managed to end up on the same highway.

For those of you who don’t know me, let me introduce myself. My name is Daniel Thompson, I am a current Road Team Captain for the Alabama Trucking Association and a line haul driver for FedEx Freight.

I am also humbled to say that I was the 2018 Driver of the Year as selected by the ATA, which, I’ll add is the most prestigious award that an Alabama-based truck driver can receive. It is certainly a career highlight for me!

Ever since Paul was born, I always thought he would be a trucker, or at least I hoped he would. I have made a very good living as a professional driver, and it seemed a natural choice. 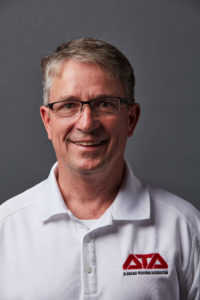 Sometimes, though, God has plans for us that we don’t understand. It was on Christmas day in Paul’s fourth year of life that I felt his path in life was chosen. Santa Claus gave him a police badge and hat with a vinyl police jacket. That was it! From then on, everything revolved around being a policeman. Catching the bad guys and saving the day.

Time flies by, and twenty-plus years later, equipped with a bachelor’s degree and two masters, Paul had to do a ride-along with the Tuscaloosa Police Department for a criminal justice project. It proved to be another sign I feel directed him on his way.

Paul came home, and over a cup of coffee, informed his mom, Susan, and me that he was not going to be a lawyer as we had assumed, but instead, he was going to be a police officer. As any mother and father would do, we supported his decision even though we clearly knew what a potentially dangerous job it is.

Over the next couple of years, I had the opportunity to swing into Tuscaloosa with my big rig and take my mandatory lunch break. I’d call Paul to see if he had time to grab a cup of coffee. If he wasn’t busy, he would pull in behind me with blue lights flashing. I often wondered what people passing by thought when they saw a policeman and a trucker walking towards each other only to see the policeman and trucker embrace each other in a hug. That’s just not something you see every day. Another six years flew by and Paul decided to try to get a position with the elite Alabama Law Enforcement Agency.

Alabama state troopers are a special breed. They are trained and molded to work mostly by themselves without access to a quick backup. The highway can be a dangerous place where things happen fast. An Alabama state trooper must be ready to be in command and is expected to be a leader in every situation whether at a minor accident scene or a major disruption on Alabama’s highways.

Oftentimes, they are the first to show up and the last to leave a situation. Whether it’s comforting an accident victim’s family or keeping a close eye out for people who make our interstates less safe, troopers are our highway heroes.

So, after an intense seven-week boot camp that not only tested his mind but also his body, Paul graduated from ALEA’s State Trooper Academy last November as part of Class 2019-C.

He then completed six more weeks of field training and was recently promoted to full status ALEA trooper. He brought skills and training he acquired while at the Tus­caloosa Police Dept. and is currently serving in Troop C assigned to Tuscaloosa County. He also serves on the Tuscaloosa Highway Patrol Post’s Traffic Homicide Unit as an investigator.

He’s also an expert in DUI enforcement, having been qualified as a Drug Recognition Expert along with just 70 other police officers, sheriff’s deputies, and troopers in the entire state of Alabama.

To say the least, his mom and I are very proud of our son even though he didn’t follow in my footsteps. As I stated earlier, I do believe God points us into the direction that he needs us. Whether he needed me to haul freight accident-free across Alabama for 39 years, or he wanted Paul to protect motorists and truckers as a trooper, our paths in life are chosen. I couldn’t be more pleased.

The next time you see a state trooper pull­ing over a trucker on I-20/59 near Tus­caloosa, remember Alabama’s Move Over Law. If it’s safe to do so, please move over one lane or decrease your speed if you can’t move over! It just might be my son pulling me over for a hug!