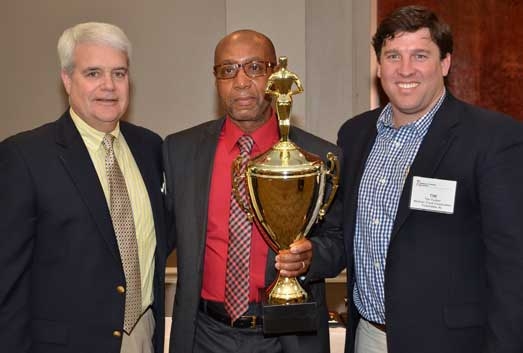 The event honors Alabama’s safest trucking firms, fleet managers, and drivers for excellence in highway safety, with more than 53 awards handed out to ATA member firms and their employees. About 200 attended the ceremony, which was held at the Pelham Civic Complex. Guest were treated to an open bar and catered dinner courtesy of the Alabama Trucking Association.

Several presentations were made for individual fleets that improved their safety rating during the previous calendar year. Contestants and nominees were judged by an independent panel composed of experts from the Federal Motor Carrier Safety Administration, the Alabama Department of Public Safety, and the Governor’s office.

According to SMMC Birmingham Chapter Chairman Herbie Boring of Southland International Trucks, more than 30 companies were honored for fleet safety excellence. “Our members continue to show dedication to operating their businesses as safely as possible,” he said. “This award program showcases the best trucking operations and individual talent our state has to offer.”

The highlight of the evening was the announcement Lewis as Driver of the Year award. According to his supervisor Golden Flake transportation director Butch Owens said Lewis has driven trucks for Golden Flake since 1978, where his duties include delivering product, unloading it by hand, and accounting supplies for inventory. Owens called him a “standard bearer for what a professional truck driver should be.” Golden Flake has even used him in one its television commercials.

In his more than 50 years of working as a professional driver, Lewis’s driving record is spotless and his reputation in the industry is impeccable.

Golden Flake was also tapped as the Alabama’s safest fleet during the ceremony. That award was sponsored by Birmingham Freightliner.

First Runner Up for Driver of the Year was Homer Kuykendall of Charles G. Lawson Trucking.