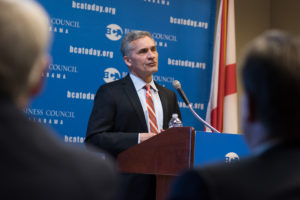 The BCA schedules a meeting each Tuesday morning during regular legislative sessions and features legislators and policy makers for BCA members. Today’s meeting was sponsored by BlueCross BlueShield of Alabama.

Marsh, R-Anniston, a businessman, addressed the second morning briefing of the session that must end on or before May 22.

Sen. Marsh said he has had a “good meeting” on infrastructure, which the BCA is heavily involved in through the Alliance for Alabama’s Infrastructure. Alabama infrastructure needs will be the subject of Wednesday news conferences in Birmingham, Huntsville, Mobile, and Montgomery sponsored by the national transportation research group TRIP.

The BCA is a founding member of the AAI. It’s a group consisting of business and community leaders who believe that it is time for Alabama to address growing infrastructure needs with a reasonable, long-term solution that returns Alabama’s transportation infrastructure to working order and allows future investment.

The last new investment in Alabama’s roads and bridges was in 1992.

Alabama’s infrastructure needs will continue and will need permanent attention, Sen. Marsh said. He said the interested parties haven’t coalesced behind one infrastructure plan but he cautioned he won’t buy into a quick fix. “I’ve asked them to look at an indexed (tax) percentage over time,” Sen. Marsh said.

He said he is working with others on a bill to extend historic building renovation tax credits that lapsed last year. Sen. Marsh said the bill will improve the Historical Rehabilitation Tax Credit program and boost the program from a B rating to an A rating.

Sen. Marsh said extending the tax credit for historical buildings cannot result in a net tax loss for the state.

“If they do not bring in revenue we don’t need them,” he said. “My goal is to turn properties into viable businesses.”

Sen. Marsh said there have been good meetings on Governor Bentley’s proposed $800 million bond issue to build four mega-prisons. “Through this process I know we can come up with legislation that can work,” he said.

He touched on the state’s two budgets by saying the General Fund will get $105 million from the BP Horizon oil spill settlement. The Education Trust Fund budget continues to be protected against proration by the Rolling Reserve Act as it was designed to do and because of that there may be a little extra money for retirement.

Sen. Marsh said that because technology is changing the marketplace, Alabama needs to address digital purchases and streaming.

Although it won’t be on the Senate agenda this session, Marsh said he is working on an education master plan from kindergarten through higher education that will include school choice.

“The state has to develop this,” Marsh said, “My goal is whoever is the next governor the Legislature will have an education road map. If we don’t get the education system under control we are in trouble.”

He has sponsored legislation would increase the tax credit scholarship donation limit for individuals from $50,000 to $75,000 and establish procedures for businesses claiming a credit against the utility gross receipts tax.