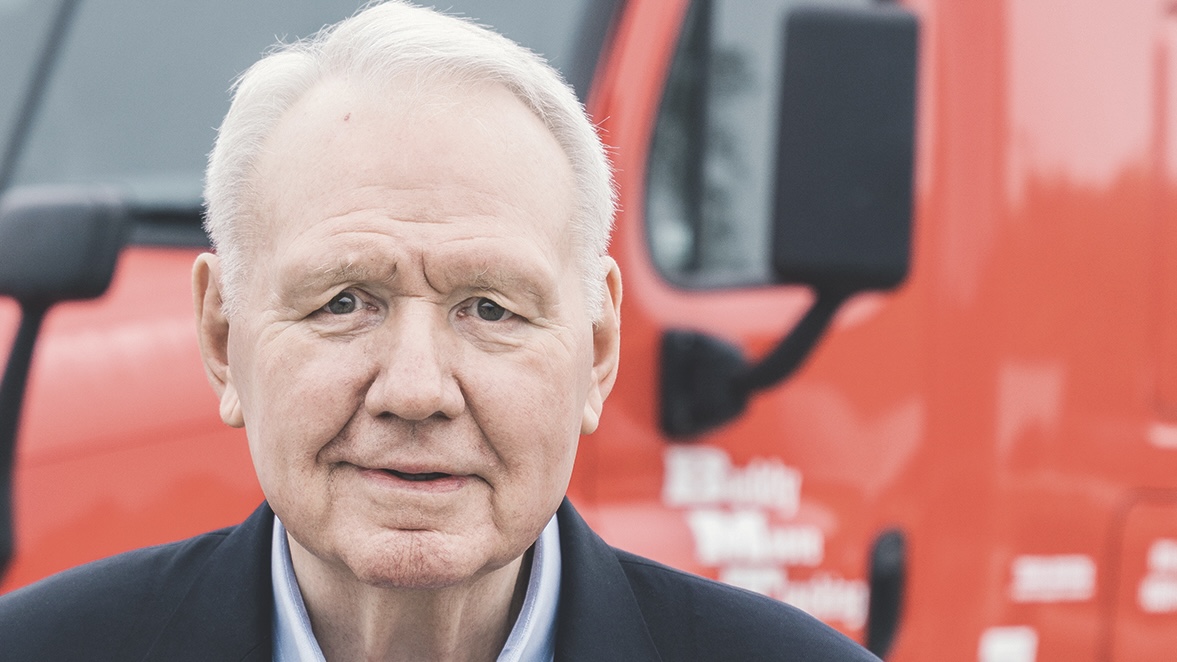 Alabama’s trucking industry lost a giant yesterday. E.H. “Buddy” Moore died peacefully at his home near McCalla, Ala. surrounded by his family. He was 88.

The Alabama Trucking Association owes so much to “Mr. Buddy” who served our association with counsel and support for more than 40 years. During that time, he served ATA in nearly every leadership position, including committee member, board member, Board Chairman, and PAC Chairman. He was elected ATA’s Chairman of the Board in 1985, and in 1993, ATA leaders gave him the H. Chester Webb Award, its highest honor for a member of the state industry. He played a role in every major Association decision shaping and cultivating much of our success.

As an industry leader, he was a respected businessman who came from nothing and earned everything he had with determination, shrewd business prowess, and an honest approach to everything he did. Many Alabama Trucking leaders will miss his wise counsel, character and friendship.

Moore grew up in McCalla, Ala., a small farming community west of Birmingham. His dad, E.H. Moore, Sr. and an uncle owned and operated a general store with a feed mill and several trucks to haul feed and hay to local farmers. Buddy grew up watching his Dad operate the store, and, along the way, learned the value of working hard and maintaining a business.

After high school, he enrolled at Auburn University, but after a couple of years, he felt it was in his best interest to return home to McCalla to start his own business. Meanwhile, he married his high school sweetheart, Paddy, in July 1954. The couple remained in McCalla while Moore operated a service station in Bessemer for several years.

Sometime around 1959, a customer who’d bought a set of tires from him on credit, showed up with his rig and told Buddy that he couldn’t pay his account and offered the keys to his 1957 R-190 International Harvester truck as payment.

“I didn’t know what to do with a truck,” Moore told ATA’s membership publication, Alabama Trucker in 2020. “My family had done business with Deaton Inc. for many years, so I called James Sizemore, who was its vice president at that time to ask if I could lease the truck to them. He explained that they would only lease the truck if I was driving it. I had reservations about driving a truck, but agreed to give it a try.”

And, thus, began a long, successful relationship with Deaton.

Moore drove as an independent operator for Deaton for a decade and was made highway safety supervisor by then-owner Bud Conaway. The company during that time owned 450 tractors and more than 1,000 trailers, making it one of the largest flatbed operators in the U.S.

He continued working his way up the ranks assuming more managerial responsibility with each title change. Eventually, he was tapped president of the company in 1979, shortly after North Carolina-based LTL carrier Old Dominion Freight Lines assumed ownership.

“Buddy Moore was a key figure in the continued growth of the company when Old Dominion had it,” Conaway told the Birmingham Business Journal back in 2003. “He was one heck of a trucking operator, and took it to the next level.”

Moore led the company for a decade before he was approached with the prospect of buying it. According to Moore, the owners at the time wanted to take the company public and needed additional capital to do so. “They essentially said, ‘Make us an offer, and we’ll give you first shot at it,’” Moore said back in 2020.

He assembled a group of investors, and in 1991, bought Deaton. However, there were two factions within the group: Moore’s, which included former Alabama Trucking Association Chairman Harold Sorrells, and former Auburn University football coach Pat Dye, who combined for a minority interest while another group held a 55-percent majority. The partnership soured quickly, and ultimately Buddy and his group were forced out of the company he’d been involved with for nearly 40 years. The company folded a few years later.

Finally free of the legal obstacles, in December 1999, Moore incorporated Buddy Moore Trucking and set up operations in a small building with a nice yard located off Finley Ave. in North Birmingham. He recruited a handful of veteran truck drivers, some of whom had worked at Deaton as owner-operators, and purchased a small fleet of International trucks from Southland Transportation Group.

His children Susan Kirkpatrick and Buck Moore left good-paying jobs to help launch the business. Susan left a successful banking career to manage the financials and bookkeeping. She’d spent nearly two decades building an impressive resume in banking with the former AmSouth Bank, now Regions, from 1985 until 2000. There she held positions in corporate accounting and spearheaded various teams on mergers and acquisitions, a skill that would benefit Buddy Moore Trucking as it grew. She now serves as Executive Vice President and Chief Financial Officer for the operation.

Buck left a successful 20-year career working in fleet management with a some of the state’s largest and most successful fleets. He brought additional real-world trucking and fleet management experience to the team. Today, he’s the company’s President and COO overseeing all daily operations.

More recently, son Alan joined the company’s brokerage division in 2016 after retiring from a long career at U.S. Steel, and daughter, Melissa, remains a shareholder.

In recent years, Buddy stepped back to let the younger generation lead the way, but everyone admits his influence was still strong even in his last years. “I guess if you had to give me a title, just say I am the Chief Second Guesser, and leave it at that,” he joked back in 2020.

By all accounts, Buddy Moore was a legend in the trucking industry, and his counsel was sought by many. The following comments are only a small selection we have received since the news spread of his passing.

Mark Colson, President & CEO of the Alabama Trucking Association in Montgomery, Ala.

“From day one at the Alabama Trucking Association, Mr. Buddy helped shape my view of the industry. He loved talking trucking and politics, and those conversations are rich memories I will cherish forever. He is the epitome of an Alabama Trucking legend, and we are all standing taller thanks to the legacy foundation he laid.”

Chris Cooper, ATA Chairman of the Board and CEO of Boyd Transportation in Birmingham, Ala.

“Mr. Buddy was the epitome of a truly great American. He believed in keeping a close family, and I always respected that about him. I’ve learned so much from watching his example and legacy in this area of life. In business, he was a trucker first! As much as anyone he understood that life. No other way to explain it, except that he got up early every morning, put on his boots, and got after it. I hope when my day has come that people will have the respect and admiration they have for Buddy Moore as a businessman, grandfather, husband, and father.”

“Buddy and I were great friends for many years. He was among the most loyal and honest people I knew, and he will be missed. In our, industry Buddy is greatly admired and has had a significant positive influence on many of us. He was a pillar of strength for the ATA for many decades. His influence there is unmatched.”

Frank Filgo, former President and CEO of Alabama Trucking Association in Montgomery, Ala.

“Trucking lost an industry giant this morning, but on a personal note, I lost a dear friend and mentor. For over 24 years, I was fortunate to work closely with Buddy on trucking industry issues. He served the Alabama Trucking Association in every leadership role be it committee member, board member, Board Chairman, PAC Chairman, etc. Over that span of time, he played a role in every major Association decision. Early on, I realized that Buddy was unique. He thrived on competition, loved the trucking industry, and he had a heart of gold. That combination made him the go-to industry leader that he was. His many accomplishments will forever be remembered by those who knew him. I will forever be indebted for his counsel and friendship.”